New hope for the destruction of chemical warfare agents 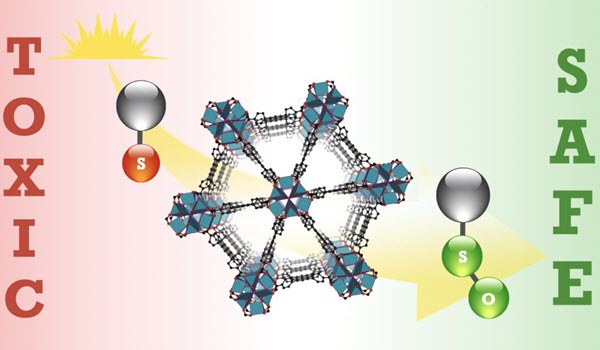 Let’s think about firearms, just by dismantling them they are not dangerous anymore, however, is not that simple for chemical warfare agents, requiring a specialized destruction so they are no longer toxic.  The very existence of these chemicals  poses a tremendous hazard to all living forms, but it is not possible to dismantle them by physical means. They need to be transformed at the molecular level in order to become an innocuous product. Happily, a class of materials known as metal–organic frameworks that became popular in the early 1990s can be used to this end.

As an historical example of a chemical warfare agent, mustard gas, used for the first time in World War I, is a liquid that is dispersed in fine droplets that when absorbed by the skin, produce large and painful blisters. Mustard gas leads to deadly bleeding in the lungs and survivors suffer genetic mutations that lead to cancer. After international agencies banned the production of mustard gas, there efforts to destroy existing stockpiles.  Burning the compound was the first strategy, but the large energy input and massive contamination through emissions made it unfeasible. So how can mustard gas be detoxified in an efficient and environmentally friendly approach? Here is where metal–organic frameworks bring hope for the sustainable degradation of mustard gas and other chemical warfare agents.

You might be wondering, what are metal–organic frameworks? Well, these materials can be thought of as crystals, like diamonds in a ring but a hundred or a thousand times smaller, and they possess a highly porous structure, similar to an sponge. Metal–organic frameworks are obtained by mixing in  solvent metal ions such as zinc, iron, or copper, and organic molecules that will form bridges between the metal ions, giving rise to small crystals with a highly porous network. These pores can absorb large quantities of the chemical warfare agent and once there, it will be degraded by the material, unchaining a chemical reaction that will change the composition of the chemical warfare agent to products without terrible health effects.

In the case of mustard gas, metal–organic frameworks comprised of organic molecules that absorb ultraviolet light can be used to produce a reactive oxygen species, called singlet oxygen. Singlet oxygen leads to the detoxification of mustard gas in a safe and efficient way, since the reactive oxygen species has a very short lifetime and thus does not linger and contaminate the surroundings. Furthermore, the use of ultraviolet light-emitting diodes provides an economic source of energy to carry out the detoxification of mustard gas.

Metal–organic frameworks are also capable of conducting other types of reactions required for the degradation of other type of chemical warfare agents without the need of light. Such is the case of  nerve agents, some of the most toxic chemical compounds known to mankind. Examples include soman and the venomous agent X which can produce death in minutes due to its neurological disruption effect. For this class of compounds, metal–organic frameworks can hydrolyze the nerve agent, essentially cutting the molecule into smaller pieces by using water as a reactant. The fast performance of these metal-organic frameworks makes them suitable for integration in gas mask filters or attachment to the fabric of suits which can be used by soldiers or civilians.

The development of metal–organic frameworks brings hope for the destruction of chemical warfare agentss around the world since they can be synthesized and used in locations where they have been stockpiled. This would negate the need to transport these dangerous substances, which is important because their transportation has been made illegal by international agreements. Currently, scientists are working to mass-produce metal organic frameworks  in hundreds of kilograms, so they can be integrated in  protective gear and used in large-scale reactors for the bulk degradation of chemical warfare agents. In practice, metal–organic frameworks will help to destroy chemical warfare agents just like dismantling firearms, but at the molecular level. The development of these materials can help to governmental agencies to end with the danger of these chemical substances.

We gratefully acknowledge Dr Diane Dechief, Science Communication Specialist and Faculty Lecture at McGill, for her help and input during the editing phase.

Financial support from the competition sponsor, The Chemical Institute of Canada, is also kindly acknowledged.

Caption and credits for the header image: Toxic chemical warfare agents can be detoxified using a particular type of microscopic sponges, also called metal–organic frameworks, which can absorb light and use that energy to degrade these chemicals to a safer product. Art by Laure-Anne Dubuc-Kanary.

We would like to acknowledge support from the Agence Science-Presse (ASP), which hosts our French-language blog Matériaux en action free of charge on its website.

The ASP has been committed to scientific and journalistic rigour for more than 40 years. The ASP is a non-profit, independent science journalism agency founded in Montreal in 1978, the only of its kind in Canada. The ASP is also the unique agency within the Francophonie specialising in communication with the mainstream media rather than with enterprises.

Through their initiatives on media and information literacy, the ASP intends to provide readers with critical tools to navigate the ever-increasing flow of fake news, misleading or incorrect information circulating online and on social media.